How a Chainsaw Works

by theprocutter | How it Works

The portable chainsaw has revolutionized the timber industry. It has made cutting of tree easy and efficient. Without the chainsaw, cutting down trees would still require an army of lumberjacks, in order to keep up with the demand for timber.

The chainsaw is made of two main systems; the engine and the chain assembly. The engine (or motor) can be either a gas engine or an electric engine. The chain assembly consists of the chain, chain bar, lubrication system, and the chain’s cutting links. The engine supplies the rotational motion that drives the chain. The chain’s cutting link cuts the wood by taking out small chips. All the components have to work perfectly for the cutting to happen without damaging the other components involved in the operation of the chainsaw. In this guide, we look at how different components of a chainsaw work together to create such an efficient wood cutting machine.

There are three main types of engines used in chainsaws.

The 2-stroke motor is the most common type of gas engine used in chainsaws. It is preferred because it has fewer components, and is therefore cheaper to make compared to the 4-stroke engine. It does not have a cam, valves, or lifters rods. It is called 2-stroke engine because that is the number of strokes or motions of a piston head that it takes for it to produce power. When the piston travels up and down a cylinder, that motion in one direction is what is called a stroke. It takes one stroke to rotate the crankshaft halfway and another stroke to complete the rotation. In a 2-stroke engine, the first movement of the piston pushes draws in air and fuel as it moves downwards in its cylinder. The second stroke compresses the air-fuel mixture which then combusts just before it is complete as the piston moves up in the cylinder. That makes the complete first cycle. The first 2-stroke cycle is unique in that it does not have a true exhaust stroke. However, the rest of the 2-stroke cycle have a combination of the intake and exhaust actions during the first stroke. The second stroke then combines the compression and power stroke as the piston moves in the upward direction. Therefore, in just one complete 360 rotation, the engine supplies one-power stroke compared to the two turns totalling 720 degrees required to achieve a power stroke in the 4-stroke cycle engine.

Now let us look at how the most common chainsaw engine converts the fuel in the tank to actual power that drives the chainsaw.

When you crank the engine by pulling the chainsaw starter pulley, the crankshaft rotates. That gives the piston a reciprocating motion. That is an up and down motion. The upward motion creates a vacuum in the crankcase below the piston. It also compresses the combustion chamber on the top of the piston. The vacuum is used to draw in air through the air filter. The motion of the air then sucks in fuel from the already in the fuel pump mini-tank. It is at that point that the air and fuel mixes. The mixture then travels to the intake port of the cylinder. The mixture then fills the crankcase to neutralize the vacuum created as the piston moves upwards. The piston reaches the top of the cylinder and reverses its motion by travelling down the cylinder. As it moves down the cylinder, its lower section or the skirt closes the intake port. That downward motion finally pressurizes the air-fuel mixture, forcing it to escape to the lower pressure zone at the top of the piton. The air-fuel mixture uses the transfer ports to get to the combustion chamber on top of the piston. Finally, the piston reaches the bottom and starts moving up again. The upward motion after some time closes the transfer ports. That traps the air-fuel mixture in the combustion chamber. Further upward movement of the piston compresses the air-fuel mixture, while at the same time creating a vacuum below in the crankcase. The compression increases the temperature of the mixture while the vacuum in the crankcase draws in fresh air-fuel mixture. Just when the piston is about to reaches the top, a spark occurs. The spark starts combustion of the mixture as the piston finishes the upwards motion. The burning gasses expand fast, creating a huge pressure that forces the piston downwards at high speed. That is the first power stroke. The rod connecting the piston with the crankshaft gives the crankshaft its first powered motion. Now as the piston moves downward, it opens the exhaust port. The air-fuel mixture that is now completely burnt then escapes through this port to create room for the incoming fresh air-fuel mixture. The process then starts all over again. Once the first power stroke occurs, these events happen so fast. A chainsaw that has 13,500 rpm will be making 225 complete cycles every second! That speed is what gives the chainsaw the ability to cut through wood so fast.

Next, let us a look at how that power gets to the chain.

The chainsaws throttle controls the supply of fuel to the engine and thus controls the saw’s revolutions per minute. The engine connects to the cutting chain itself as the prime mover using a clutch and a sprocket. The throttle allows the chainsaw operator to increase or decrease the saw’s speed as may require adapting to different jobs. Modern chainsaws automatically stop the chain as soon as the operator releases the pressure on the throttle as a safety mechanism.

Among the clutch’s suction in engine control is to keep the engine from stalling if the chain abruptly stops or slows which is relatively a common occurrence when cutting through hard or frozen wood. Another of the clutch’s functions is to prevent is to avoid the chain from rotating while the engine is idling, preventing accidental injury to the user or damage to the saw. A well-tuned clutch keeps the machine running consistently and efficiently, improving performance and safety.

The chain is the part of the chainsaw whose components do the actual cutting. That means that you do not want the chain to run if you are not doing any actual cutting. That would be dangerous and inefficient. That problem is solved by the use of the centrifugal clutch. The centrifugal clutch transfers the rotational power to the chainsaw’s chain when the operator pulls on the throttle. That happens because it is designed to force itself onto the gears that drive the chain sprocket when the engine is rotating at high speeds, and pull away as soon as the speeds drop. The gears then transfer the power to the sprockets that drive the chain. The chain rolls on a long steel plate called the chainsaw guide bar.

Starting a chainsaw engine with a pulley starter is not as easy as turning an ignition key. Hence the ability to keep you saw running at low speeds so that you do not turn it off is a great advantage. The centrifugal clutch enables this. It stops the chain from moving when the engine slows down (idling) and rotates it when the engine is running at high speeds. That is one of the best safety features of the chainsaw. The image below labels all the critical components that make a chainsaw work. 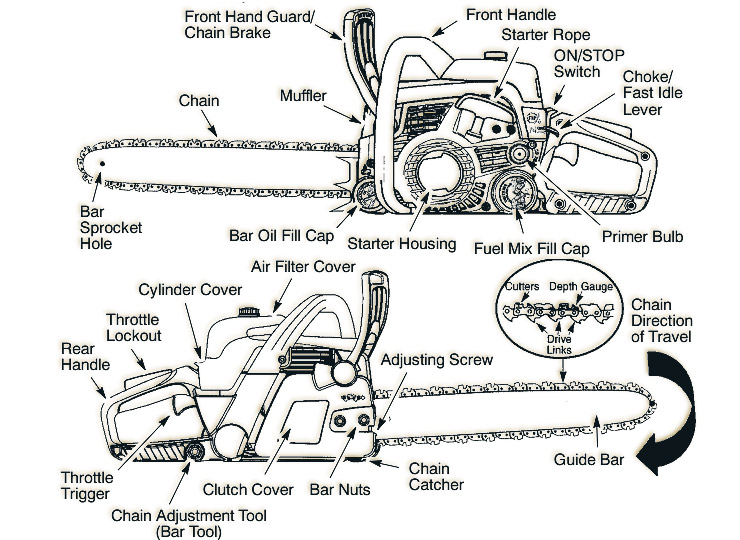 How the Chain Cuts

A chainsaw’s guide bar is a long, rounded piece of metal which is usually made from a wear-resistant steel alloy. Guide bars typically range from 16-36 inches long. An edge slot around the outside of the bar guides the cutting chain and holds it in position. The operator controls the machine by placing the guide bar against the object he wants to cut. Previously, loop-style guide bars known as bow bars were used to buck logs and clear Bush, but their use is now obsolete due to their increased risk of injury.

Once you pull on the throttle and the chain is set in motion at high speed, it can cut through wood if its cutting links are sharp. The chain’s cutting part is called the cutter teeth or cutting link. It is sharp but delicate; cutting material such as soil, dirt, and rock can quickly blunt it. Let us look at the cutting links that make the chain such a special component of the chainsaw. The two main types of cutter teeth are the round and square cutter teeth. Most chainsaw will have the square-ground chisel bit. It is preferred because it cuts better compared to others cutter teeth. However, it’s less suitable for cutting hardwood.

To summarize all the the components of a chainsaw and how they work, see this video of  Stihl chainsaw below.

The piston has to make four movements before a complete powering cycle occurs. In the first stroke, the crankshaft turns halfway; the air-fuel mixture is drawn into the engine as piston moves down the cylinder. At this point, the intake valve is kept open by the camshaft rod. In the second stroke when the crankshaft completes its first rotation, the air-fuel mixture is compressed in the engine as the piston moves up the cylinder. In this stroke, both exhaust and intake valves are closed. In the third stroke, as the piston travels down the cylinder for a second time, the fuel burns. The valves remain closed at this time as well. By now, the crankshaft will have made one and half rotations. Finally, the piston travels up the cylinder forcing out the exhaust gasses through the exhaust valve. During this last cycle, the intake valve closes while the exhaust valve opens. Now, the crankshaft will have made two complete rotations or 720 degrees turn. It is important to observe the chainsaw will have only gotten one power stroke from the two turns.