Electric vs. Gas Chainsaw, which one is the right one for you? This article will provide you with an in-depth analysis of the different chainsaws available in the market today, whether gas, battery or corded electric. It will also give you the advantages of each one so you can make an intelligent decision. We know that it can be confusing when shopping for a chainsaw, so that’s why we created this guide.

Due to their complex structure and added accessories, gas chainsaws will cost you more than your average electric chainsaw. Lighter-duty gas-powered models cost less, but for routine tree cutting, a beefier model might better suffice, with pieces starting at $180, the gas powered saw may cost more but does much heavier cutting that requires more torque and horsepower. The electric chainsaw comes in two forms; corded and cordless ones with a battery. They cost less as compared to the gas chainsaws due to their simpler engine construction. However, corded chainsaws are far cheaper than the battery powered chainsaws and deliver more power and torque. Corded electric chainsaws may cost as little as $70 and thus are ideal for users who are operating on a budget and have small to medium lumber to cut.

Fuel/Oil for the Engine

Gas powered chainsaws require fuel in the form of gasoline and lubrication for the engine to run. The more often you use your saw the more fuel and oil you will need to buy hence more cost. It’s critical for you to know what to use to prevent your machine from destroying itself from the inside out. Gas chainsaws are 2-stroke engine thus you need to mix two cycle oil and gas. This is to enhance the optimal performance of the crankcase compression two-stroke engine and acts as a lubricant to keep those engine parts from moving.

Your electrical chainsaw does not need the add-on oil for it to run. However, it still needs oil for lubrication. The oil is not to be mixed with gas, but rather to be used as a lubricant for the chainsaw bar and chain.  The oil used for gas chainsaws is the same one used for electric chainsaws. Avoid the use of used motor oil or vegetable oil as this might damage your chainsaw’s oiling system. Due to the need of only one type of oil, the electric chainsaw costs less to oil.

Electric chainsaws are a cheaper option when it comes to servicing costs as compared to gas powered saws. As they contain a very simple and reliable electric motor, servicing does not to be done often, you can even to check the electric motor yourself for signs of damage. They do however need good attention paid to the chain bar and chain to ensure the saw runs smoothly, just like a gas chainsaw. Gas or petrol powered chainsaws need to be serviced regularly (see user manual for periods) this is to ensure to more complicated combustion engine is well maintained, spark plugs need to be checked, carburettor and other mechanical engine components. Luckily you can learn to service your own chainsaw too which makes it at low cost exercise to maintain it in good working order as long as you do it properly.

Both electric and gas powered chainsaws require a small amount of chain oil to be used in order for the saw not to overheat as the blade/cutting teeth run over the chain bar. Most modern saws have an easy to access chain oil tank that you should fill up before each use. This oil differs from the engine oil which gas chainsaws users must mix in with the fuel. in summary both electric and gas saws need chain bar oil, different models use it faster than others though. 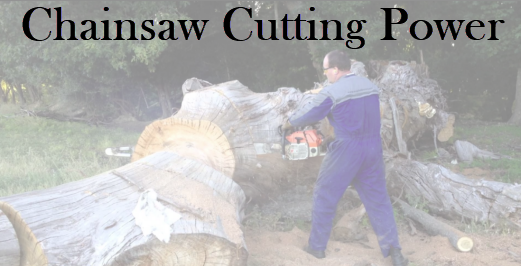 The benefits to using a gas chainsaw relate to its power. If you need to do a big cutting job, an electric chainsaw simply won’t cut it. You are going to get more horsepower and cutting torque with a gasoline chainsaw than an electric could ever hope to deliver. Gas chainsaws are overall a harder working saw, as long as you have a big enough engine you can pretty much get through anything. You don’t need a plug-in power source for a gas saw. This means you can work freely far away from a generator or outlet and not worry about a cumbersome extension cord or the battery going flat. In saying this a lot of good quality corded electric saws can deliver a chainspeed equal to that of some small to medium sized gas saws, so they still have plenty of power to offer the occasional home user.

Electric chainsaws are light and compact, so they are not a burden to carry. Gasoline Chainsaws tend to be a little bigger than electric chainsaws. They are often heavier, making them a bit more cumbersome to use. This makes them less than ideal for minor jobs. The fact that you have to carry the gas tank with you while operating a gas saw also adds to the weight making them exhausting to use for longer periods of time.

How easy the chainsaw can be handled is another factor. Remember, this is a unit that may be utilized by the old members of the family, and they need ease in handling it. Anyway, even the most experienced will need something that’s easy to handle than the others.

Typically, these electric chainsaws are always easy to carry around since they are lightweight. This can’t be said about the gas engines which are relatively much heavier and bigger. The electric saws don’t have a gas tank thus are smaller, compact and lighter. They are the most appropriate tool for the senior persons who don’t have much energy as well as those people with little lumbering experience.

This is by far the biggest disadvantage that the electric chainsaw has when compared with the gas chainsaws. Unfortunately the more powerful electric chainsaw models require electrical extension cords connected to mains power or an AC generator. This is a downside to these saws if you need work any distance from a wall socket. Typically, one needs to be within a hundred feet from a power outlet. You won’t be able to go into the forest with your saw, something that the gas types easily do.

You can alternatively opt for a battery-powered chainsaw such as the GreenWorks 20312 G-MAX 40V that comes with no cords and no fuel fumes to worry about. However the battery life, while good won’t last for as long when doing continuous work as a full tank of gas will.

In conclusion as you can see there are both positives and negatives for each type of chainsaw. You will need to decide want pros you need or want to most and what cons you can live with.

In general though Electric Chainsaws are best for people who do not need to tackle large jobs and want something easy to start and easy to use.

Gas chainsaws are great for large amounts of power and can cut through anything, probably the best bet if you need to cut large pieces of timber on a regular basis.